DAVE + SAM CHALLENGE THE STATUS QUO WITH PROVOCATIVE NEW VIDEO ?TIL THE WORLD BLOW UP?

Dave + Sam continue their mission to create music and visual art that challenge the status quo.  “Til The World Blow Up” featuring Mike Dunn is from the duo’s album ‘No Shade’ which was released this past March on Classic Music Company.

The video is a stark reminder of the world we live in today and the climate of racial tensions coming to a head after the death of George Floyd.  The video is a call to action and an ode to those who took the streets in protest to demand change.

“While the initial recording of Til the World Blow Up was a reaction to the institutional and systemic violence proposed by fascist movements such as Make America Great Again and Brexit, its visual is the result of those ideas realized. Amid civil unrest following the unlawful murders of George Floyd, Breonna Taylor, and too many other Black lives turned hashtags at the hands of the police; the global economy has also been rocked by a health pandemic of historic proportion, all of which has brought upon significant societal change. Though fear, mourning, and financial woes mount, our creativity and expressions of solidarity have shone brightly via social media and connected the world — perhaps more so than ever. If Hip Hop was historically seen as the CNN of marginalized communities, House was certainly the heartbeat. Through director Blake Symphony’s take on that metaphor and the Chicago-centered collaboration of Dave + Sam & Mike Dunn — we plan to keep that same energy.” -Dave Giles II

The video is available on Classic Music Company’s YouTube on August 17.
https://youtu.be/9qnIakPs6So 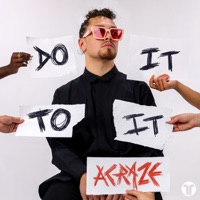 Do It To It