Regard unveils new mobile and desktop game ?Regard Runner?

Drawing inspiration from Regard’s creative, the addictive ‘Regard Runner’ game takes fans into Regard’s world where they’ll play to collect points which unlock exclusive prices. Points are displayed on a leader board and fans can screenshot and share their scores on socials.

Regard explains: “I’m so excited to launch this game. It’s so addictive and I love that I could incorporate other artists I’m working with into the creative. Keep playing to unlock prizes!”

Kosovan DJ and producer Regard garnered global attention with his debut single ‘Ride It’ which became an international hit, taking the internet and Tik Tok by storm, achieving over ten Top 10 single chart placements globally, including #2 in the UK where it is now certified platinum.

The link between the gaming and music world has been strengthening with the growth of platforms like Twitch & Fortnite. We’ve seen artists such as Travis Scott and Marshmello really capitalising on this. Ministry of Sound were keen to see how they could further the reach of their artists by tapping into this market whilst also creating engaging content for fans. This is the first time Ministry have commissioned a game of this scale, and worked with The Creative Corporation to bring their vision to life.

“The project has been a great opportunity for our company, to build on our knowledge and expertise in both game development and digital innovation, using Spotify’s impressive API technology.

This is also one of those rare opportunities when everything lines up perfectly. Great artist, great music and a great label with a team that is both switched on and hungry to develop new and innovative ways of engaging with their audience”.

More recently he collaborated with RAYE on ‘Secrets’, a new single that has already amassed over 50 million combined streams and solidified his position as one of the most exciting new artists, achieving his second Top 10 single in the UK. ‘Regard Runner’ sees one of the world’s biggest producers diversify and try something new. 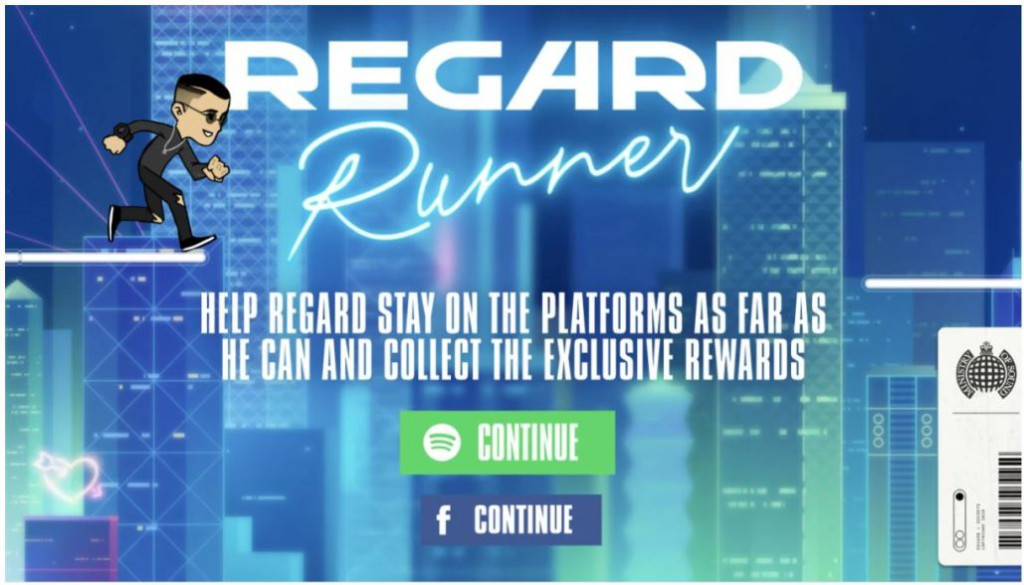