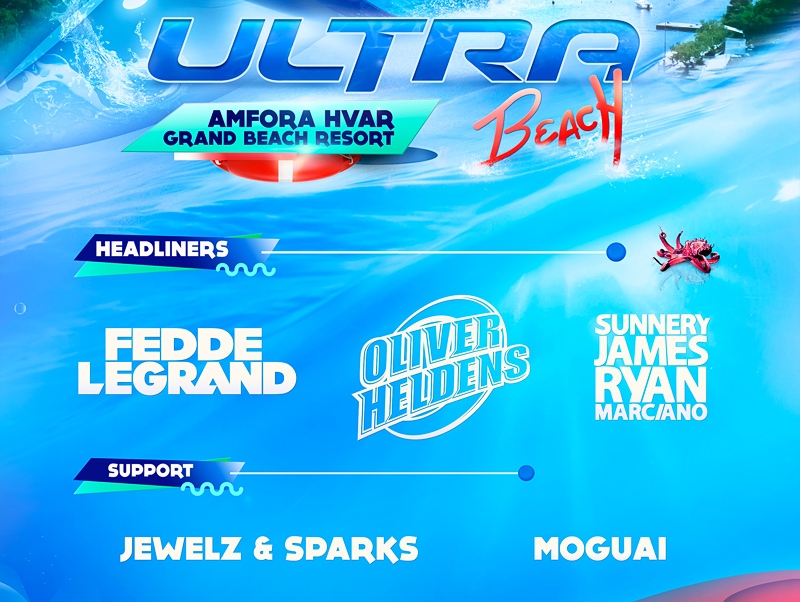 Having only just dropped the impressive Phase One lineup for its three day flagship event at the Poljud Stadium in Split, Ultra Europe, Croatia’s biggest ever electronic music festival, now reveals the array of DJs set to grace its exclusive 5,000 capacity pool party, dubbed Ultra Beach!

On July 14, the Dalmatian coast’s most legendary pool party will return to the idyllic Hotel Amfora Grand Beach Resort on the picturesque island of Hvar for its third consecutive annual edition, and it’s looking bigger and better than ever!

First up, and one of three headliners to be announced, is Dutch legend Fedde Le Grand. A true Ultra mainstay, Fedde has been on a tear as of late, having recently rocked six sold out ‘GRAND’ shows on the trot in his hometown of Amsterdam. Following the Dutch trend, future house maestro Oliver Heldens will be making his Ultra Europe debut, armed with global hits such as “Gecko” and “Koala“. Completing the Ultra Beach headliner lineup is progressive duo Sunnery James & Ryan Marciano, who having played the Ultra Europe Main Stage back in 2013, will be looking to impress the beautiful revelers in an altogether different setting. Supporting the headline talent will be German DJ/Producer duo Jewels & Sparks and fellow countryman Moguai.

Having welcomed over 150,000 attendees from over 125 countries in July 2014, the 2015 edition of Ultra Europe is set to break even more records as it expands into a historic event spanning a mammoth seven days. In addition to the three days of festivities held inside the Poljud Stadium and the one day Ultra Beach party on the island of Hvar, Ultra Europe will also be hosting three extra parties across the period, including an Opening Party in Split on July 9, a one-off Regatta on July 13 and the official Closing Party on the island of Vis on July 15.

For tickets and all other information head to www.ultraeurope.com

In 2014, the festival expanded from two to three days, welcoming over 150,000 fans from 125 countries around the world (12 of which had never visited Croatia before) to dance through the night at the Poljud Stadium in the historic city of Split, with over 1.6 million watching via the official UMF TV livestream.  In addition, each year Ultra Europe has hosted its celebrated ‘Ultra Beach’ event—an exclusive 5,000 capacity pool party at the Hotel Grand Amfora on the nearby Island of Hvar.

2015 will see Ultra Europe expand to a weeklong festival, with events spanning seven consecutive days. In addition to the flagship three-day festival at the Poljud Stadium (July 10-12) and the legendary Ultra Beach pool party on Hvar Island (July 14), Ultra Europe will now be curating an official Warm Up Party on July 9, an innovative Ultra Europe Regatta on July 13 and an official Closing Party on the island of Vis on July 15.