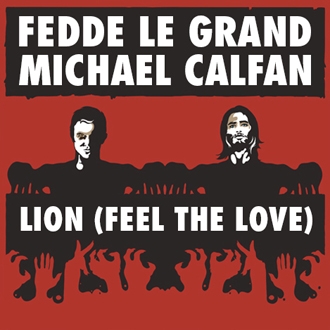 Combining the creative forces of Dutch wizard Fedde Le Grand and French house impresario Michael Calfan, and after only a relatively short time teasing the collective minds of the blogosphere masses, the pair’s huge new track ‘Lion (Feel The Love)’ is finally out for official download duty on the world’s biggest online electronic store, Beatport.

Following Fedde’s stunning guest mix on Pete Tong’s Evolution Radio show, the godfather of dance music offered his continuing love for Le Grand as he aired ‘Lion (Feel The Love)’ last week and since, the track has been generating huge hype both on and off the Internet.  Fans plastered YouTube and Soundcloud with support and the backing hardly stopped there. Hailing the collaboration as ‘monstrous’ (Your EDM), ‘epic’ (Whomping Stereo), ‘blinding’ (Dancing Astronaut) and guaranteed to ‘blow your mind’ (Elite Daily), the critics went wild for the track and following suit, fellow producers jumped on board. The likes of Cedric Gervais, W&W and John Dahlbäck all offered their glowing praise, with ‘sick!’ and ‘phat!’ becoming the buzzwords from the best DJs around who commended the release.

For those who want to get a little closer to Fedde Le Grand, this Tuesday (August 6th) provides the perfect opportunity as the legendary producer and DJ teams up with Ministry of Sound London ahead of his August 10th headline gig for his first ever Google+ Hangout.

From 6.30pm GMT on Tuesday August 6th Fedde will be online and live for an intimate 1 on 1 at www.google.com/+MinistrySound. Fans can ask Fedde their questions by logging in to Google+ or going on Twitter and using the tag #ASKFLG. Once the Hangout is finished, fans can still catch the action as the legendary London promoters upload the video to MoSTV.

Fedde Le Grand & Michael Calfan – ‘Lion (Feel The Love)’ sees the light of day today, much to the pleasure of the two super producer’s baying fans. Those wanting to get a full dose of the new single in live splendour will have plenty of opportunity, as Le Grand’s immense summer tour continues over the coming months – to find out where and when you can catch him live, visit www.feddelegrand.com/events.